Self cleaning windows and titanium dioxide


Since self cleaning windows have been around since 2001, I suppose the main characteristics can be probably classified as common knowledge by now.

For the sake of thoroughness, let me quickly run through them. Not a very difficult task since there really are only two of them. A window with self cleaning properties is defined by having the glass surface treated so it displays one of the two key properties: hydrophobicity or hydrophilicity.

Hydrophobicity, literally meaning “fearful of water”, is achieved by modifying the architecture of the usual smooth surface of the glass with the objective to create “little bumps”. A material gets wet because water easily adheres to it, transforming from droplets into a thin layer. The smoother the surface, the wetter it gets. As the surface gets “bumpy” the droplets keep their shape and roll off the surface instead of sticking to it. The effect was discovered and shaped after examples found in nature and it is still called “the lotus effect” or sometimes “the butterfly wing effect”. In self cleaning windows the modifications of glass surface are made at nano structure level so as to not alter the transparency properties.

Hidrophilicity (“love of water”) is the exact opposite. The glass surface is treated as to attract water. And then titanium dioxide’s photo catalytic effect comes into play. It is also known as “the Honda-Fujishima effect” based on the first researcher that documented it. Basically, titanium dioxide has the unique ability to decompose water and certain other organic materials when exposed to light (more precisely, to UV rays). 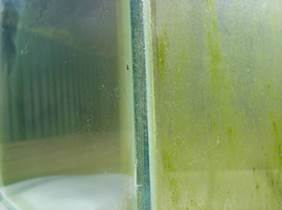 Thus, hydrophilic auto cleaning windows are made by apply a thin titanium dioxide layer on the surface of the glass. Water droplets containing impurities that come in contact with it are decomposed by the photo catalytic effect, thus keeping the surface clean. See an example in the picture

All this sounds pretty exciting and innovative, a marvel of the modern era. But there is a long way from the exciting range of a theoretical discovery and the practical application. The first thing that is to be noted is that both of these solutions require water in order to function properly. If you’re living in a particular dry climate or encounter a particularly longer dry spell, you may find yourself needing professional cleaning services again.

This may not be such a disaster, but self cleaning windows are priced accordingly with the high-tech profile, and installation costs are 10 to 20% higher than for normal windows. Also, special care is required during installation and use. Silicon based sealants are specifically excluded by virtually all the manufactures as silicone is known to react with the titanium dioxide layer and destroy it. The layer can also be destroyed by careless mechanical operation such as relocating and maintenance operations.

There are some substances that simply are not affected by the photo catalytic effect – such as blood, stucco or opaque paints. Sometimes, even a simple, common residue as bird muck, if dried up, has to be removed manually.

Quick fact: Most of the formerly known self cleaning windows are now being remarketed as “low maintenance windows”.

I personally think that the research funds that went into developing self cleaning windows would have been much useful if employed in other phocatalytic related fields – such as clean energy generators, hydrogen generation, not to mention the medical field for innovative cures involving photo catalytic destruction of viruses or tumors.

Return from Self Cleaning Windows to Titanium Dioxide